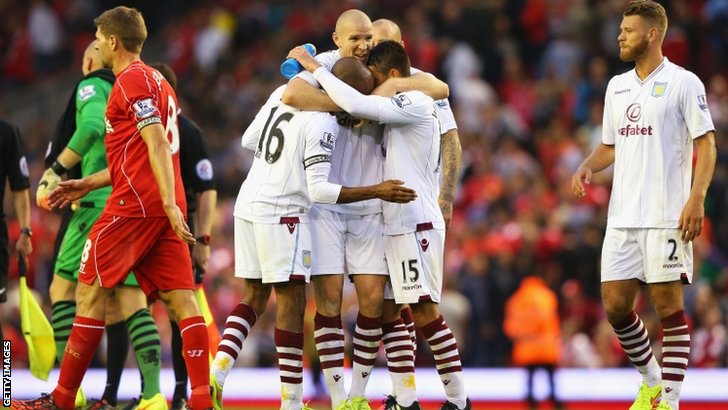 Brendan Rogers side were beaten by a defiant Paul Lambert’s young outfit.

Liverpool failed to beat Aston villa in the late fixture of the Barclays Premier League.

With Daniel Sturridge nursing a thigh injury, the host were forced to make a tactical switch in their play- Sterling replaced by Lallana, while Mario Balotelli spearheaded the attack.

The visitors got on the front foot with Alan Hutton giving Dejan Lovren menacing times. At the other end, Lazar Markovic volley went just wide. Soon afterwards, the 20-year old failed to connect properly to a cross sent in from the right flank.

In the second half, Jordan Henderson sents in a superb pass to Raheem Sterling, the England International fed Philippe Coutinho but his shot was blocked, that illustrated a frustrating evening in Anfield.

Aston Villa held on to secure all three points.

“It is one of toughest places to come in Europe, let alone Britain, but i think we deserved the win. With Philippe Senderos’ header and Andreas Weimann’s chance I think we could have been three up.

“I thought that Tom Cleverley was excellent and Ashley Westwood could be ready to take the same step up that Fabian Delph has taken if he keeps playing like that.

“There is a lot of momentum on and off the pitch at his club, the players have been excellent as a group and the supporters have stuck with it and now our young guys are turning into young men.”