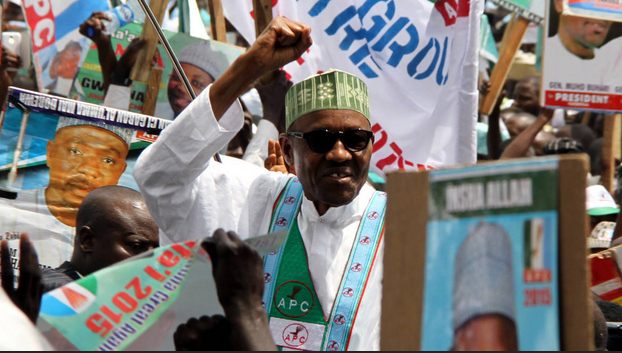 A former head of state, Gen. Muhammadu Buhari (retd), on Wednesday commended the Nigerian Armed Forces for their courage in the battle against the Boko Haram insurgency in the country.

Buhari, who gave the commendation at the Eagle Square, Abuja, where he declared his intention to contest the 2015 presidential elections on the platform of the All Progressives Congress (APC), said the Nigerian military deserved to be celebrated for their perseverance and urged Nigerians to resolve to rid the country of Boko Haram.

“I would like us to place on record our appreciation for the efforts of our Armed Forces under the new leadership and police in confronting these challenges. This is an occasion to celebrate and appreciate their efforts”.

Declaring his interest, the retired army general said: “I humbly wish to present myself before you, before all Nigerians and before God, seeking to be elected as APC’s presidential candidate”.

He said he was in the race because “nearly all are in fear of their lives or safety for themselves and their families due to insurgency by the godless movement called Boko Haram.

“By marauding murderers in towns and villages, armed robbers on the highways and kidnappers who have put whole communities to fright and sometimes to flight”.

Outlining his nine-point agenda, Buhari promised to tackle corruption which he described as “blatant and widespread. The rest of the world looks at Nigeria as the home of corruption. Nigeria is a country where stealing is not corruption”.

Other critical areas he promised to look into if elected are solid mineral exploitation and reviving industries to attract employment and restoring honour and integrity to public service.

The event was attended by prominent members of All Progressives Congress across the country, including Governors Adams Oshiomhole of Edo; Tanko Al-Makura of Nasarawa and Babatunde Fashola of Lagos State.

Information Nigeria reports that the former head of state’s declaration is the fourth since the return to democratic rule in 1999.

In 2003, he contested the presidential election on the platform of the All Nigeria People’s Party (ANPP) against Chief Olusegun Obasanjo of the PDP but he was defeated.

He again came out in 2007 on the platform of ANPP but lost to another PDP candidate and fellow Katsina State indigene, Umaru Yar’Adua.

In 2010, Buhari left the ANPP for a party he helped build from the scratch – the Congress for Progressive Change (CPC) – where he picked the presidential ticket of the party and vowed that the 2011 general elections would be his last shot at the presidency. He, again, lost to a PDP candidate, incumbent President Goodluck Jonathan.

If he clinches the APC ticket to contest the 2015 presidential poll, Buhari would have contested for the highest office in the land an unprecedented record fourth time.