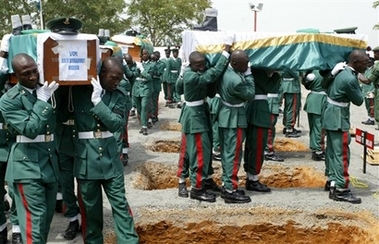 The military high command has denied insinuations that soldiers, who died in action at the theatre of war in the North East, were being buried in mass graves.

The Chief of Defence Staff, Air Chief Alex Badeh and the Chief of Army Staff, Lt-Gen. Kenneth Minimah, debunked the claim while fielding questions from journalists at a press briefing organized by the Minister of Defence, Lt-Gen. Aliyu Gusau (retd), on the 2015 Armed Forces Remembrance Day Celebration in Abuja on Tuesday.

Badeh, who spoke first on the issue raised by journalists that the military had not been giving celebrated burials to those killed in battle, said that the claim was untrue.

He, however, passed the microphone to Gen. Minimah, as the head of the Nigerian Army.

“…Now let me hand over the microphone to the Chief of Army Staff. He will talk the little bit I know on this burial issue, because I know why that question came. There are insinuations that we bury people in mass graves which is not true”, the Chief of Defence Staff said.

The COAS, Minimah, said that soldiers who got killed in battle, were given befitting burial with full military honours in military cemeteries nearest to the field of operations in line with the policy of the Nigerian Army, which he said has been in existence for a long time.

The Army Chief explained that the military had also ensured that the families of fallen soldiers especially their next-of-kin were invited to attend such burials.