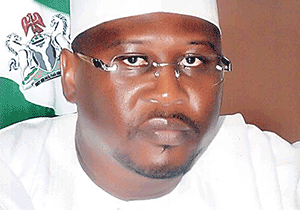 The sacked acting governor of Adamawa State, Ahmadu Fintiri, has returned to his former position as Speaker of the State House of Assembly.

Fintiri was the Speaker of the Assembly that orchestrated the ouster of former Governor Murtala Nyako in July.

Meanwhile, Fintiri has expressed his appreciation to people of the state for the “tremendous support” they gave him during his two months and three weeks’ reign as acting governor.

In a statement issued by his Chief Press Secretary, Mr. Solomon Kumangar, in Yola, the state capital on Thursday, Fintiri announced that he had reverted to his position as the Speaker even as he appeals against his removal as acting governor.

He expressed appreciation to “the youth, women, elders, stakeholders, the political and working class” for their support.

Part of the statement reads,  “Ahmadu Umaru Fintiri, who has since resumed office as the Speaker of the Adamawa State House of Assembly, also expresses gratitude to all state legislators, members of the National Assembly, the Peoples Democratic Party, the opposition and the overwhelming majority of the people, who not only shared his vision and zeal of rescuing and emancipating Adamawa State from the shackles of bad governance but rallied together with him to banish tyranny, tribalism and primordial sentiment from adamawa State.

“He pledges his life to the struggle to lift Adamawa State out of the morass in which it has found itself and that the whole issue is not about Fintiri but about Adamawa State.

“He said anyone who takes the democratic revolution that has taken place as personal is being selfish and does not love Adamawa State”.