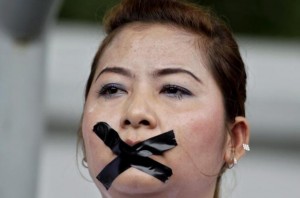 Myanmar has sentenced a media owner, publisher and three reporters to two years in prison for an article published by a privately run journal, which the government said caused public alarm.

The article, which was published in Bi Mon Te on July 7, reported about an activist group that claimed that opposition leader Aung San Suu Kyi and several other political allies had been elected as the country’s interim leaders to replace President Thein Sein’s administration.

The journal has been suspended since the five were indicted, the AP news agency reported.

Defense lawyer Kyaw Win told Radio Free Asia’s Myanmar Service that the five should have been charged under the country’s Media Law, rather than Section 505(b) of the Penal Code, which prohibits statements that could cause public chaos and carries a much heavier maximum punishment.

He said that the defendants would appeal the sentence to a higher court.

Several local journalists held a protest in front of the Pabedan township court over what they said was a harsh sentence, local media reported.

Despite dramatic changes since 2011, when a new nominally civilian government came to power, journalists are increasingly being arrested and imprisoned.

On July 10, five journalists from the Yangon-based journal Unity were sentenced to 10 years hard labor for disclosing state secrets in an article about an alleged chemical weapons factory.

Myanmar ranks 145th out of 180 countries in the world according to the Press Freedom Index.