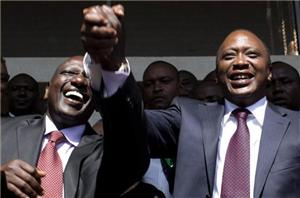 Controversial and billionaire Kenyan President Uhuru Kenyatta said on Monday that he would temporarily step down as president while attending a hearing at the International Criminal Court this week.

In a televised address before parliament, Kenyatta said he would invoke a never-before-used article of the constitution that will see Kenya’s Deputy President William Ruto temporarily fulfil the top role. That article stipulates the deputy to fill in when the president is absent, temporarily incapacitated or during any other period of the president’s choosing.

The temporary abdication of the country’s top political job is Kenyatta’s way of fulfilling the court order that he attend, but insisting that he be a private citizen during the court hearing and not the first sitting president before the court.

“It is for this reason that I chose not to put the sovereignty of more than 40 million Kenyans on trial since their democratic will should never be subject to another jurisdiction,” said Kenyatta.

Kenyatta faces five counts at the Hague-based court over his alleged role in masterminding post-election violence in 2007 and 2008 that left 1,200 people dead and 600,000 displaced. What began as political riots quickly turned into ethnic killings of Kenyatta’s Kikuyu tribe, who in return launched reprisal attacks, plunging Kenya into its worst wave of unrest since independence in 1963.

Had Kenyatta refused to go, as some within his political party have urged him to, he would have risked facing an international arrest warrant as well as international condemnation and possible economic sanctions against Kenya.

The Kenyan leader has appeared at the ICC before, but not since he was elected president in March 2013