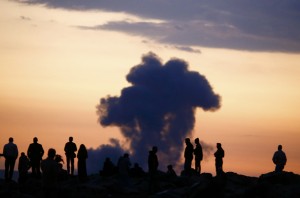 Kurdish fighters have retaken a hill near Kobane from ISIL fighters that could prove essential if further supply airdrops are made by the US and its allies.

The hill to the west of the town was retaken overnight on Thursday with the help of an air attack, said a reporter reporting from the Turkey-Syria border.

Smith said the hill had been lost to the Islamic State in Iraq and the Levant (ISIL) group on October 22, but was retaken in clashes overnight.

“Most fighting here takes place in the dark. The retaking of the hill to the west of the city is significant because we believe it was where the airdrop took place,” a reporter said. “It remains a very fluid situation in Kobane.”

On October 19, the US made an airdrop of weapons and supplies to Kurdish fighters defending the border town against ISIL despite its ally Turkey’s declarations opposing such a move.

Fighting for Kobane, known as Ain al-Arab in Arabic, has raged for more than a month. Despite air strikes by the US-led coalition, Kurdish fighters have not been able to push back ISIL.

Earlier this week, the parliament of the semi-autonomous Kurdish region of Iraq voted to send Peshmerga forces to Kobane after Ankara pledged to facilitate their passage through Turkish territory.

Turkish President Recep Tayyip Erdogan also said on Friday that the Kurdish PYD who were defending Kobane had agreed to the passage of 1,300 Free Syrian Army (FSA) fighters to help them against ISIL.

“The PYD said that it accepted the passage of 1,300 people from the FSA, and on this topic right now our relevant teams are negotiating what the route of their passage should be,” Erdogan said during a news conference in the Estonian capital of Tallinn.