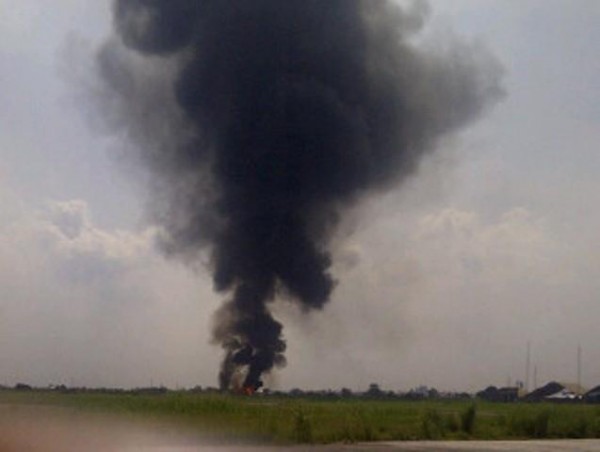 Leadership reports that the supposed tragedy that would have struck the Nigerian military was however, averted as there was no casualty recorded in the incident.

It was reported that the aircraft was damaged but the pilot and other crew members miraculously escaped without sustaining any injury.

Meanwhile, it was the averted tragedy that left the Adamawa State Governor, Mr. Bala Ngillari, and some of his executives stranded at the airport as the incident crumbled the departure of the governor’s plane that was scheduled to depart for Abuja on an official assignment.

It was disclosed that the affected aircraft was on a mission to transport injured soldiers from Yola to Kaduna State for medical attention before the crash occurred. The crash reportedly happened at about midday when the aircraft was yet to carry the wounded soldiers.

A source at the airport said the aircraft was almost landing at the international airport when it suddenly changed direction and crashed causing pandemonium in the vicinity.

It was a military source who spoke on condition of anonymity that revealed that the plane was supposed to convey wounded soldiers from Yola to Kaduna when the incident occurred. He said the crash was a minor one and that the plane only suffered trivial damages.

However, airport sources stressed that the incident delayed landing and take-off of other aircrafts, a development which made some of them to be diverted to other airports.

The airport officials had commenced their normal duties and kept sealed lips over the incident describing it as military affairs.  As at press time, normalcy had returned at the vicinity.