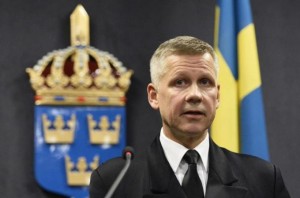 He said the operation was based on a tip-off from a “credible source” and that about 200 Swedish troops were involved. He added that no weapons had been used in the operation.

Wikstrom did not specify how close the operation was to the Swedish capital, nor whether the activity involved one or more submarines, but said that he was informing the public as the area is “heavily trafficked”.

The Svenska Dagbladet  newspaper reported that the sighting was at an island located just over 50km from the centre of Stockholm.

Other Swedish media outlets reported seeing several military boats, a larger vessel in Kanholmsfjarden, and a number of helicopters heading from the mainland towards the area where the operation is taking place.

In recent months, Sweden has recorded an increase in Baltic Sea manoeuvres by the Russian air force – including an incident in September when two SU24 fighter-bombers allegedly entered Swedish airspace.

The then-foreign minister, Carl Bildt, called it “the most serious aerial incursion by the Russians” in almost a decade.

“As the government has said, the situation has deteriorated in the Baltic Sea,” Wikstrom said on Friday.

During the Cold War the then-neutral – and now non-aligned – Sweden was regularly on alert following Russian submarine sightings.

A Soviet submarine ran aground 10km from one of Sweden’s largest naval bases in 1981.