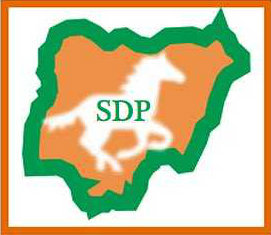 The National Chairman of Social Democratic Party (SDP), Chief Olu Falae, Thursday flagged off the Lagos chapter of the party.

Chief Falae while addressing party supporters in Lagos, said that all the parties without ideology would fade away.

“By the grace of God SDP will control Ogun State House of Assembly. We will win many seats in Lagos and across the South West states,” the former presidential aspirant prayed.

He confirmed Chief Supo Shonibare, as chairman of the party in Lagos, just as he urged party members in the South West to ensure that they contest in all elective positions in the state.

Former Governor of Ogun State, Olusegun Osoba, who was represented by Sen. Gbenga Kaka (Ogun East Senatorial District) said that the SDP was where to be and also the party to beat in 2015.

He described the party as the fastest growing in Ogun State and Nigeria. “We will return all our candidates in the 2015 polls,” he promised.

Kaka and to other senators from the state – Akin Odunsi (Ogun West) and Gbenga Obadara (Ogun Central) – had weeks ago defected from the All Progressives Congress (APC) to the SDP following an alleged “fractionalisation in the party (APC) in Ogun State, leading to the emergence of parallel executives from ward, local government area to state levels.”

Hons. Olufemi Allen-Taylor, Oludaisi Elemide and Elizabeth Anifowose of the Ogun State House of Assembly had also defected from the APC to SDP.