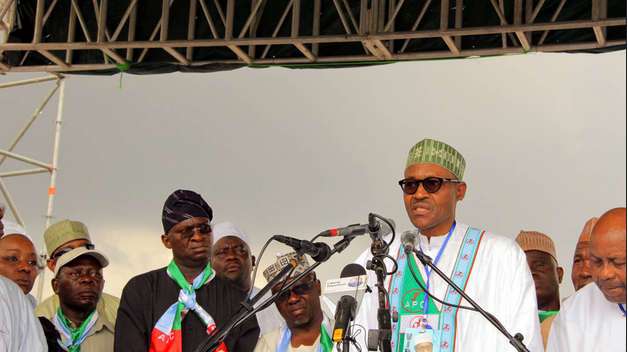 A former Head of State and presidential aspirant on the platform of All Progressives Congress, APC, Gen. Muhammadu Buhari (retd), has condemned Saturday’s raid on the data centre of the party in Lagos by operatives of the State Security Service, SSS.

In a statement Tuesday, Mr. Buhari said with the raid, the President Goodluck Jonathan-led administration “seems intent on demonstrating for all to see that they have mastered the art of how to push a nation into chaos within the shortest time possible”.

The former head of state said the early morning attack is a display in a growing chain of abuse and violation of the constitution and political rights of the people under the current administration.

“It is a reckless act that must be condemned in the strongest possible terms”, he added.

The spokesperson of the SSS, Marilyn Ogar, had said in a statement that the security agency carried out the raid based on a petition it received and subsequent confirmation, after due surveillance of the building that some persons were engaging in ‘unwholesome activities’ there, which included cloning of Permanent Voters card, PVC.

Ms. Ogar also claimed that the security outfit was not aware the building belonged to the APC or that it served as the opposition party’s data centre.

Mr. Buhari, however, insisted that the centre just houses internal party membership information and was also an important vehicle to disseminate information to APC members.

“Yet, for conducting functions necessary and proper for a political party operating within the democratic context, the centre became a hated target of the Jonathan government and the PDP”, he said.

He also said the government cannot wash its hands off the incident because the security operatives that conducted the raid must have been ordered from Abuja.

“They would not have done what they did unless given the mandate from their high bosses in Abuja.

“Attempting to defend the indefensible, they fabricate a story that the attack was necessary because criminal activity was taking place at the Centre. These statements are such plain lies”, Mr. Buhari said.

The former Head of State also stated that actions, such as the raid of the data centre indicate that the government is not interested in protecting democracy and allowing free choice by Nigerians.

“From these attacks, this government is signaling to the Nigerian people they have no intention of holding anything resembling free and fair elections.

“Their goal is not to create a level electoral playing field. Their goal is to level the opposition into the dust through the abuse of federal power”, he said.

The presidential aspirant said seeing imminent failure if free and fair elections are held, the ruling Peoples Democratic Party will go to any length to remain in power.

“The crumbling PDP government is trying its utmost to stop the irresistible force of the people’s desire for progressive change that will establish peace and security as well as bring widely-shared prosperity for all.

“The PDP knows the APC is the vehicle to bring this change; thus the PDP is doing all it can to damage that vehicle.

“The APC is an idea whose time has come because we are committed to govern Nigeria as if it were a great nation and not to destroy it as if it were a conquered country”.

Mr. Buhari added that despite these attempts by the PDP, the APC will continue to insist on the conduct of a free and fair election.

He said the party will surely abide by the result of any election, if they are held in a free, fair manner, adding however that “we will not stand idly and watch this government dismantle even the small, incomplete fragments of democracy this nation has struggled so hard and long to build”.

“To allow this demolition will be more than a tragedy for the APC. It will separate the nation from its future greatness. We shall use all legal and constitutional means – from the courts, to the press, to protests – to alert the people and world to the shadow this government seeks to cast over the nation, and we shall use these same means to disperse that shadow so that free and fair elections can be had”, Buhari said.