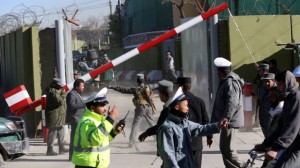 Officials in Kabul say a suicide bomber was able to infiltrate the police headquarters in the Afghan capital Kabul on Sunday morning and blew himself up in an attempt to assassinate the city’s police chief, killing one senior police officer and wounding at least seven others in the process. According to Fox News:

The ability of the bomber to penetrate the heavily guarded police compound in the heart of the capital adds to concerns about the readiness of national security forces to combat a still-virulent Taliban insurgency as a dwindling number of U.S. and NATO troops shift to a training and support role by the end of this year.

It will also likely revive fears that the security forces have been infiltrated by insurgents, following a series of attacks on coalition forces by rogue members of the army and police.

Kabul’s chief of police Gen, Mohammad Zahir Zahir said that the attacker was just meters from his office when he detonated an explosives-packed vest.

“A suicide bomber in military uniform carried out the attack on the third floor of the building, where my office is located,” General Mohammad Zahir Zahir told the Associated Press by telephone.