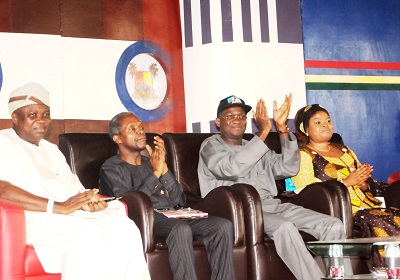 The running mate to the All Progressives Congress presidential candidate, Prof. Yemi Osinbajo (SAN), on Tuesday, said the deplorable state of the nation’s economy has plunged many Nigerians into poverty.

He added that for Nigerians to be liberated from the pangs of poverty there must be a change of government at the federal level.

The APC vice presidential candidate spoke at a town hall meeting with artisans, tradesmen and farmers, organised by the Lagos State Government in Ikeja.

The former Lagos Attorney General noted that only those who love poverty and would want to remain perpetually in hunger, would vote for President Goodluck Jonathan in 2015.

Osinbajo said, “No one is ignorant of all that is happening in this country. No one likes hunger and poverty, but people are hungry. In 2015, only those who love to continue to be hungry that would prefer that the government in power at the centre remains there.

“By God’s grace, we will remove them from the seat of power. The people there presently cannot do anything because they don’t know what to do. They lack the capacity and capability to govern the country”.

Speaking in the same vein, the APC governorship candidate in Lagos State, Mr. Akinwunmi Ambode, said APC, from the period of Asiwaju Bola Tinubu to Governor Babatunde Fashola, had continuously provided good governance to the people of the state, adding that if voted into power, his government would not deviate from the principle.

Ambode said, “Our promise to you as a party is to provide good governance and able leadership. We want to take good care of your businesses so that you will have more to take care of yourself, your children and your home. There must be change of government at the Federal level. APC must take over in Abuja”.

In his remarks, Fashola noted that if Nigerians observed the situation of the country critically, they would find that the country was not better off than it was in 2011.

Fashola, who urged Nigerians to vote for APC at both the governorship and presidential elections, said, “The time to make a very important decision is here. Your request for continuity in Lagos is what I support. But for that project to continue, it would require you to vote for our party in 2015 election.

“Also, Muhammed Buhari and Osinbajo are our candidates for the presidential election, if you vote them into power in 2015, you will have successfully rescued this country from destruction”.