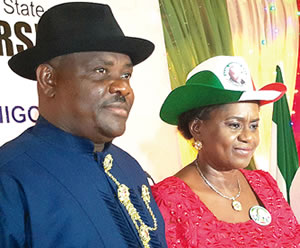 The governorship candidate of the Peoples Democratic Party (PDP) in Rivers State, Chief Nyesom Wike, yesterday made a bold statement that women would have a prominent role in his government if elected, as he presented Dr (Mrs) Ipalibo Banigo as his running mate for the 2015 election in the state.

Speaking during the presentation in Port Harcourt on Tuesday, Wike said the choice of a female running mate was informed by the desire to create a special place for women to play active roles in the politics and development of the state.

Describing Mrs. Banigo, who is a former Head of Service in the state, as a rare breed and a leader with uncommon traits, Wike expressed the optimism that she would join him in the onerous task of rebuilding the state.

Mrs. Banigo was a career public servant, who had at various times held offices such as permanent secretary, head of service and secretary to the state government, before retiring from the state public service.

A Kalabari from Degema local government area of the state, Banigo had her MBBS from the University of Ibadan in 1976 and also attended some other first-rated universities abroad, including Harvard (1981) and the University of London (1990 and 1992, respectively).

According to Wike, the task of choosing a running mate took a long time in order to get the right person to do the job, adding that it was more challenging because of what he said was the deep rot in governance in the state.

The PDP governorship candidate said, “The search has ended. Dr (Mrs) Banigo is a rare breed and a leader with uncommon traits. She will join us to rebuild the state. Her choice was informed by the need to create a special place for women to play active role in the politics of the state.

“Since 1967 when the state was created, no woman has been given such an opportunity. Yet, the history of the state is replete with women of great achievements.

“The time has come to give women the chance to play pivotal roles in the state. Rivers PDP is determined to move away from the primordial era of treating women with disdain and indignity.

“We want to move away from the acts of our opponents who relish giving out token to women. As a first step, Rivers PDP decided that a woman should occupy the post.

“Our choice is a tested retired public servant. She was a permanent secretary, a former Head of Service and Secretary to the State Government before retiring. She is a medical doctor and an accomplished professional, with long experience of integrity”.

In her acceptance speech, Banigo said her public presentation was an epoch-making event, adding that she was honoured to be considered and nominated as the Rivers PDP deputy governorship candidate.

Acknowledging the various challenges facing the state and the country, the former SSG said it becomes more appalling in the face of the dwindling revenue and security issues, among others.

She described her nomination as an honour for Rivers’ women and promised that she would deploy her experience to the service of the state, especially the empowerment of women.