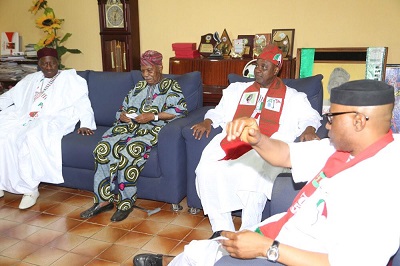 A Yoruba socio-cultural group, Afenifere Renewal Group, ARG, has condemned the use of its insignia to support President Goodluck Jonathan’s re-election bid, adding that it is not a party to the president’s endorsement.

In a statement in Lagos Wednesday, the group said that the use of ‘Afenifere’ to promote Mr. Jonathan is fraudulent and an attempt to deceive the Yoruba people.

“It has come to our notice that some broadcast stations are using ARG’s name and logo to promote the said endorsement”, said Kunle Famoriyo, ARG’s Publicity Secretary.

“This is fraudulent and we wish to advice media houses to be wary of such fraudulent promoters especially now that public interest must be defended by the media”.

The apex Yoruba socio-political group, Afenifere, had on Tuesday in Akure, Ondo State, endorsed Mr. Jonathan for a second term in office.

According to the group, the endorsement was necessary to enable President Jonathan complete his “transformation agenda” as well as implement the recommendations of the 2014 National Conference report.

“Afenifere is a socio-political association. We have always spoken out our minds on any matter that affects our country”, Seinde Arogbola, the group’s National Secretary, had said.

“We therefore want to say it loud and clear that after considering so many things, the Nigerian Constitution inclusive, we see you for now as the best option to continue as the president of our dear country”.

But Mr. Famoriyo distanced ARG from the endorsement, adding that the group does not think that Mr. Jonathan’s performance as president since May 2010 was worth the endorsement of any patriotic citizen.

“We believe there is a difference between ‘transformation,’ which President Jonathan promised Nigerians in 2011 and mere ‘reform’ of the same governance culture that Nigerians have rejected”, said Mr. Famoriyo.

“The ARG does not dictate to the generality of the Yoruba people, rather it gives voice to their feelings and aspirations. The extensive consultations we have made showed that Yoruba people have come to a firm conclusion that they have been at the shorter end of the stick under the Jonathan-led Government, under whose administration, nepotism and ethnocentrism have taken over as the emblem of our presidential politics.

“ARG therefore stands with the aspirations of Yoruba people for change. As echoed in Abeokuta recently at the public lecture organised by the Ogun State chapter of ARG, the change that we demand include a public pledge to restructure the country in such a way that power will devolve to the most efficient federating unit”.