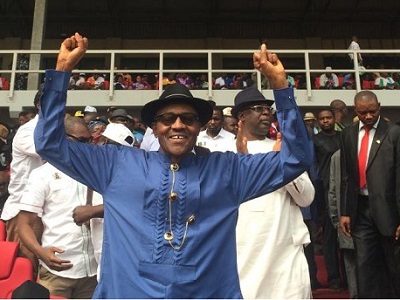 The Buhari campaign has assured Nigerians that, when elected into office in the February 14 general elections, the All Progressives Congress presidential candidate will initiate policies and programmes that will impact positively on the lives of youths and women.

The APC Presidential Campaign Organisation said this in a statement signed by its Director of Media and Publicity, Mallam Garba Shehu, in Abuja, on Thursday.

According to the organisation, the APC manifesto contains several innovations and legislative proposals that will promote the manpower development and social participation of women and youths in the country.

The statement partly read: “Drawing extensively from the information contained in the APC’s manifesto, a federal government under the leadership of Buhari promises to offer women and youths in Nigeria a new deal.

“We are firmly committed to the value that women are the backbone of the Nigerian society, especially in our rural communities. Therefore, issues that matter to the average Nigerian woman cut across the spectrum of policy areas, such as agriculture – where they predominate as farmers and farm labour – to health and education, where their concern for their children are paramount.

“Our policy position for woman takes into cognisance the fact that in spite of several rights outlined in the 1999 Constitution, many women do not enjoy the same freedom as men, particularly in the fields of education, economic empowerment and political participation”.

It also noted that no society can move forward with half of its population suffering systemic discrimination.

To this end, “an APC government will seek to end all forms of gender discrimination in both public and private sectors, in education, employment and housing and also protect equal property and inheritance rights”, the campaign organization said.

The statement further explained that the core policy objectives of the APC for women and youths include, “improving anti-discriminatory legislation and instituting merit-based affirmative action in employment; injecting gender as a component of federal character and appointing a Minister for Women and Gender in the Office of the President”.

Others include: “Enforcing legal protection for the fundamental rights of the girl-child in all areas of religious, social and economic life”.

Other policy concerns according to the statement include, “providing women with greater legal protection from domestic violence and sexual harassment; empowering the Police with specialist training on handling of domestic violence issues; strengthening coordination between women and youths’ agencies at state and federal levels cutting across ethnic and religious barriers”.

Other policy initiatives that a Buhari administration will enthrone include: improving and strengthening support for women and youths’ participation in all sectors of the economy through training and skill acquisition; develop innovative ways of encouraging women and youths participation.

It also promised to encourage local governments to combat female adult illiteracy with education programmes in local languages and provide incentives for the private sector to support these initiatives.