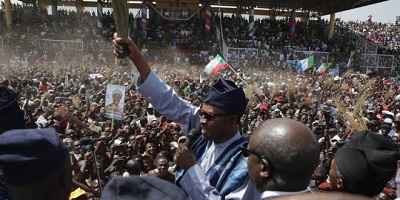 The Presidential Candidate of the All Progressives Congress, Gen. Muhammadu Buhari, says the APC government will end current epileptic power supply in the country.

He further said that, if elected, the administration would focus on the provision of employment to curtail youth restiveness and insecurity in the country.

“I will revive mining industries and give loan to our businessmen and women in such a way that our economy will emerge stronger than ever.

The APC candidate pledged to transform the health sector through the provision of modern equipment, qualified medical personnel and adequate drugs across the country.

He noted the neglect of agriculture in the country, saying that the APC government would open up the sector, especially fishing and rice production, to generate employment and boost rural economy.

“We will also be transparent and uphold trust and confidence entrusted in us by Nigerians, if elected into power in the 2015 elections”, he said.

In a remark, the APC governorship candidate in the state, Alhaji Atiku Bagudo, assured that the people of the state would vote massively for the party.

According to him, the Peoples Democratic Party government has stagnated progress in the state and the people are yearning for change.

Bagudo pledged to exploit the agriculture and mineral resources in the state to provide employment and generate revenue.

NAN reports that the presidential campaign was held on Thursday at about 10:00 pm with large turnout of party supporters.