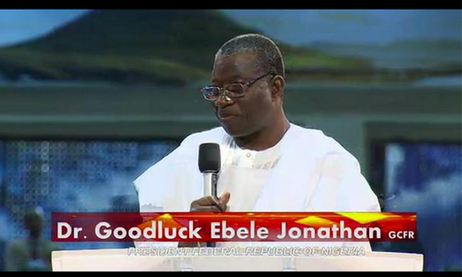 The President revealed the reason for his visit was to worship God with members of the Living Faith Church since he happened to be in Lagos. The presiding Bishop of the Church, David Oyedepo, who welcomed President Jonathan to the pulpit with a hug, asked members of his congregation to join him in praying for the president, in obedience to a biblical injunction that asks every Christian to pray for his leader.

Taking a cue from the book of 2nd Timothy Chapter 2 verses 1 and 2, Papa, as the bishop is fondly called, led the whole congregation in an intense prayer session for President Jonathan. This was during the 3rd service at Faith Tabernacle, the headquarters of Winners’ Chapel, a 50,000-seater auditorium reputed to be the largest in the world. FT News brings you the full text of the prayers for the President.
PREAMBLE
“2Tim 2:1-2: I exhort you therefore, that first of all, supplications, prayers and intercessions, and giving of thanks, be made for all men.” Then on the priority list is “For kings and for all that are in authority; that we may lead a quiet and peaceable life in all godliness and honesty.”
“I only had an idea of the president’s visit just yesterday. It wasn’t there last Friday when we had the One Night with The king. So we are going to pray for our president…the generation of the Old Testament knew the value of blessings; they would even cry for it. Every blessing proclaimed upon you today must answer on your life.”
I like us to be on our feet and lift the president up to God. Whatever you desire to see God bring about in his life; bring about in our nation, begin to pray that prayer right now.
NOW THE CONGREGATIONAL PRAYER BEGINS!

Father, release your grace upon the president to manage the demands of his office. Release unusual grace in increasing dimensions, to manage the demands of his office.
Cause your face to shine upon him. Lord, grant the desires of his heart. Grant Nigeria peace. Under him, grant Nigeria greater advancement. Thank you father, in Jesus’ name we pray.”
THEN THE BISHOP ALONE PRAYS FOR THE PRESIDENT
“This entire church proclaims the president blessed today; blessed with divine wisdom to manage the demands of his office; blessed with keys to see the miraculous in his life; blessed with grace that will advance His cause in our nation.
Every time we pray here, God hears. The Bible says “Wherever 2 or 3 are gathered, I’m there in their midst, and if we agree concerning anything, it’s done for us. Therefore, in the name of Jesus, our president is declared blessed. His going out is blessed, his coming in is blessed. The will of God is blessed in his life. Thank you father, blessed be your name, in Jesus precious name.”