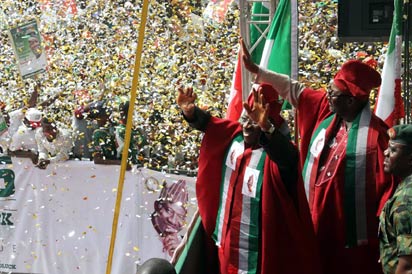 President Goodluck Jonathan on Monday berthed his campaign train in Ibadan, the Oyo State capital, where he described some former leaders of the National Democratic Coalition, NADECO, in the South-West as hypocrites.

The president, who arrived at the Mapo Hall venue of the campaign at 12.50pm, after paying homage to the Olubadan of Ibadanland, called on the South-West leaders to justify their leadership style and love for the people.

He also stated that instead of building prisons for the youths, he would build schools for them.

He said, “I did say that the South-West reminds one of the days of the National Democratic Coalition. But I am convinced that some of the NADECO actors are hypocrites, because they cannot justify what they are doing today. The South-West believes in human rights and social justice. No south-westerner will pray that someone who does not go through proper trial will be jailed for 300 years and above. If they are not hypocrites, they couldn’t be doing what they are doing today, but I don’t want to go into that now. If they are not hypocrites, they will not be talking about not empowering women.

“Without education, you cannot change people. If I did not go to school, I will not be where I am today. Every Nigerian child must have the Goodluck opportunity; that is why we are building out-of-school children secondary schools and Almajiris schools in some parts of Nigeria. I will not build prison for you but I will build schools for you”.

On the issue of corruption in government, Jonathan said that his administration had tried and jailed many Nigerians but that did not stop the problem of corruption. He explained that the problem would be solved through modern technology rather than adopting a harsh approach.

He said, “On the issue of corruption, let me reassure Nigerians that my commitment and method of solving the problem of corruption is not the number of people I tried and jailed. We have tried more Nigerians; more Nigerians have been jailed within this period after passing through due process. But I have told people that if I try 10 million Nigerians and jail five million for corruption; that will not solve the problem. We must use modern technology to prevent people from stealing, and that is what we are working on. If you vote me in again, the day I will leave after four years, the next president will not have to tackle corruption because we will use technology to block areas where people are corruptly enriching themselves. We are no longer in the analogue generation, I will solve corruption problem in this country”.

President Jonathan, who is the Peoples Democratic Party, PDP, presidential candidate in the February 14, 2015 presidential election, also used the opportunity to tell Nigerians that if re-elected for a second tenure, his administration would give more opportunity to women in government, saying that women’s place was not in the kitchen or creating babies all the time.

While thanking the Ibadan people for coming out in their numbers to welcome him, Jonathan said that after meeting the Olubadan, he was convinced that the foremost city deserved an international airport.

The president was accompanied on the campaign by the National Chairman of the PDP, Adamu Mu’azu, members of the National Working Committee of the party, the Ondo State Governor, Olusegun Mimiko; FCT Minister, Mrs. Olajumoke Akinjide and other National Assembly members.