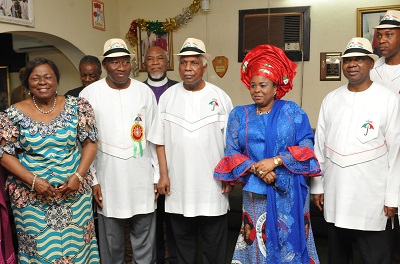 The Peoples Democratic Party leadership in the South-East has faulted a former Vice President, Chief Alex Ekwueme, over his recent prediction that President Goodluck Jonathan might not secure a block vote in the zone in the February 14 presidential election, as he did in 2011. This is just as the South-East Governors’ Forum also dismissed the recent showing of the All Progressives Congress, APC, in the region.

Ekwueme, who is one of the founding fathers of the PDP, in a recent interview with a national daily, had carpeted Jonathan for taking the South-East geo-political zone for granted despite the zone’s overwhelming support for him in 2011.

According to him, most of the president’s campaign promises to the zone had not been fulfilled and warned of a protest vote in the forthcoming elections as some of the people would give their support to other presidential candidates with better agenda for the zone.

But reacting to the former vice president’s remarks, the National Vice Chairman of the PDP, Col. Austin Akobundu (retd.), said that Ekwueme’s “prediction was incorrect and did not reflect the realities on the ground”.

Speaking in Umuahia, Abia State, the PDP stalwart pointed out that the South-East remained a very strong support base of Jonathan, assuring the president that the zone would still give him 100 per cent support as was the case in 2011.

Akobundu said, “I have serious respect for Chief Ekwueme but he should realise that the PDP is dynamic and he should not expect the party to still be what he saw in 1998. The South-East is totally behind Jonathan and nothing can change this. Anybody making any prediction to the contrary is out of touch with the realities on ground.The South-East is better off with the PDP than any other party”.

He, however, noted that the former vice president must have spoken out of annoyance, perhaps, arising from the primaries.

He added that the PDP in the zone had set up a reconciliation panel to reconcile all aggrieved members, explaining that post-primary crisis was not peculiar to the ruling party.

Similarly, the South-East Governor’s Forum said the zone would not relent in its avowed support for Jonathan.

The Chairman of the Forum and Governor of Abia State, Chief Theodore Orji, said anybody predicting failure for Jonathan in the zone must be on his own “because the people are united in their support for the President”.

The governor, who made this position known through his Special Adviser on Political Matters, Chief Abraham Ama, said, “It is unfortunate that Ekwueme has lost touch with the realities of the moment”.

Governor Orji noted that Ekwueme “is a man highly respected among Ndigbo” but said his predictions about the fortunes of the President in the forthcoming presidential election did not reflect the mind of the people.

He insisted that nothing would stop Jonathan from winning 100 per cent of votes in the South-East as the zone could ill afford to abandon the president, considering his numerous gestures to the people.

According to him, Ndigbo have never had it so good under any other president in the history of Nigeria compared to what they have benefited under Jonathan.

Orji said that apart from Jonathan, no other presidential candidate was popular among Ndigbo. He affirmed that the President would have a landslide victory in the zone.

He said, “The APC here sounds like Boko Haram, and you cannot see any well-meaning Igbo son in theAPC. Rochas Okorocha knows he has missed the way, and Ogbonnaya Onu cannot even win in his ward. So, no other party is recognised here”.

The governor restated the readiness of Ndigbo to deliver the zone for Jonathan next month.