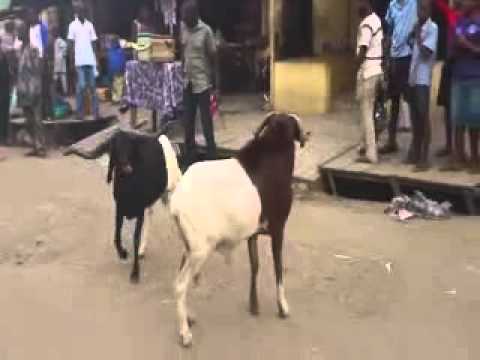 Two rams have been arrested by the Police in Ado-Ekiti, the Ekiti State capital, for attacking and injuring a 65-year-old woman popularly called ‘Iya Oyo’.

Narrating her ordeal, Iya Oyo said she was on her way to a commercial bank in Okesa area with her son on Monday to withdraw some money when one of the rams reportedly owned by a manager of a filling station in the area, went berserk and gored her, fracturing her right thigh.

The victim, who was writhing in pains at a traditional orthopedic clinic where she was rushed to by sympathisers, said that she fell immediately after the attack and became unconscious only to find herself at the clinic where she regained consciousness.

According to her, “on the fateful day, I was going to the Union Bank with my son. We were walking on the walkway and saw the rams in front of us but not knowing what was on their mind. Immediately they sighted us coming, one of them rushed and hit me several times with its horns. Immediately, I fell but as I was struggling to get up, the second ram joined the first to attack me. Thank God that some people came and saved me from untimely death in the hands of these ‘mad rams’”.

Residents of the town, who pleaded anonymity, described the rams as “too notorious and always ready to attack people at sight”.

“We have complained several times to the owner of the rams to tame them but to no avail. The animals are always roaming the streets and daring people”, they said.

It was learnt that the owner of the rams has since gone into hiding since the attack took place without offering any form of assistance to the victim.

The director of the trado-medical centre, Chief Ezekiel Ogunjemilusi, said Iya Oyo was brought to his clinic with fractures on two sides of her right leg noting that the injury will take few weeks to heal.

Though there was no official statement on the incident, a highly placed police officer at the Area command confirmed the attack.