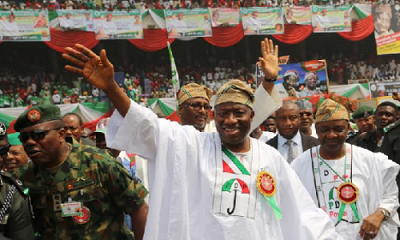 The Minister of Education, Malam Ibrahim Shekarau, on Thursday commended supporters of the Peoples Democratic Party, PDP, for their peaceful conduct during the Presidential campaign in Kano.

Shekarau gave the commendation at a news conference in Kano.

He said the commendation was necessary because they exhibited the highest sense of responsibility during the campaign which was held on Wednesday.

“We felt it necessary to express our appreciation to all Kano citizens as well as all the PDP supporters in the state for taking the pain to attend the programme.

“We have to thank them for their patience and perseverance throughout the day”, he said.

Shekarau, who called on the party members to continue to exhibit good conduct during campaigns, urged them to avoid acts capable of igniting violence in the state.

“We must avoid violence, character assassination and unguarded utterances during campaigns.

“Rather than castigation of personalities, we should base our campaigns on issues”, he said.

Shekarau also advised PDP supporters to be tolerant in case of any provocation from the opponent particularly during local government campaign tours.

He also thanked the Emir of Kano, Alhaji Muhammadu Sanusi II for his fatherly advice when President Goodluck Jonathan paid him a courtesy call at his palace. (NAN)