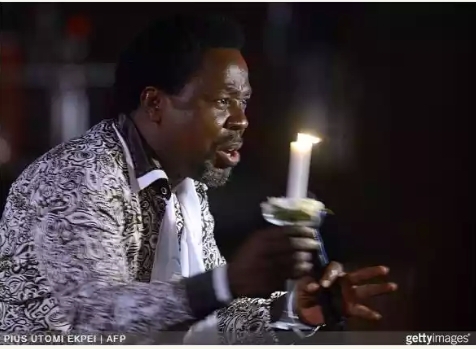 At a candle light vigil service held to usher in the New Year 2015 at The Synagogue, Church Of All Nations (SCOAN) in Lagos, Nigerian Prophet T.B. Joshua declared 2015 to be ‘the year of good morning’.

In the energetic service broadcast live on Christian television station Emmanuel TV, Joshua admonished congregants on the need to ‘worship God in Spirit’ in a sermon titled, ‘Discovering your real value’.

“Christianity lies in the heart,” he told the multitude of worshippers, adding that merely observing religious ceremonies does not signify genuine Christianity.

The crowds, including a huge array of foreign guests sporadically waving their national flags, thronged every available space within the sprawling church complex, even spilling onto the adjoining roads.

“If you are expecting a New Year, you must be pure in heart,” he stressed, reminding the faithful of Jesus Christ’s words in Matthew 5:8. “If not, the troubled year of 2014 will continue in 2015,” he warned.

Although Joshua uncharacteristically did not give his yearly prediction, his message conveyed that the troubles witnessed worldwide throughout 2014 would persist in 2015 but genuine Christians would grow stronger through them.

“No matter what this coming year brings, if you are more of God, your trials are the soil in which your faith will flourish,” he enjoined the congregation.

He stressed that the freedom the Bible speaks of in John 8:36 is spiritual not physical, insisting that a ‘free spirit,’ was needed for Christians to enjoy peace throughout 2015. “This liberation of your spirit is all you need to have the best year,” he stated.

“You just need a Word from God to change the course of your life,” Joshua continued. “God said I should give you the Word – Good Morning! Instead of saying ‘Happy New Year’, say ‘Good Morning’. 2014 was the afternoon but now we are going to the morning. This Word is anointed.”

The cleric revealed that from henceforth, irrespective of the actual time of the day, Christians should maintain the greeting, ‘Good morning’, insisting that a spiritual blessing was attached to such proclamation.

Among the nearly 2,000 foreign guests in attendance at the ‘crossover service’ were 44 family members of those who tragically died when a building collapsed within the church compound on September 12th 2014.

Earlier in the day, Joshua had called on his Facebook followers to submit their prayer requests for 2015; almost 100,000 responses were posted in a matter of hours.