The All Progressive Congress, (APC) rally in the Oworonshoki area of Lagos State on Monday flared as thugs invaded the rally, stabbing two youths in the process. 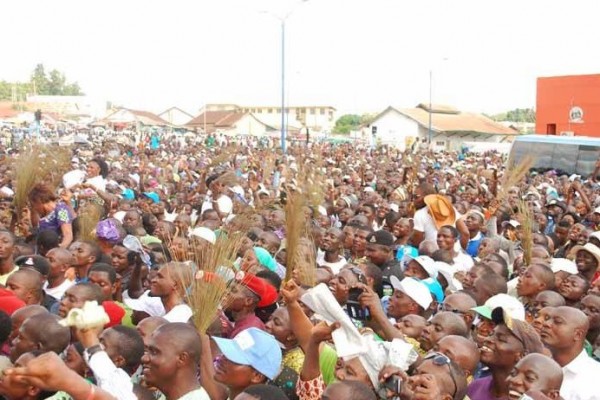 The violence was reportedly caused by a supremacy battle between two rival cults based in the Bariga area of the state and policemen were folding their arms as the thugs’ unleashed mayhem.
http://www.newbalanceshoesinc.com new balance 574 mens
Journalists, who were covering the event, clustered on the platform to avoid being caught in the crossfire.

The thugs did not seem disturbed as the violence continued even while Governor Babatunde Fashola was delivering a speech alongside leaders of the APC in the Kosofe Local Government Area of the state.

One of the youth that was attacked attempted to escape, but he was surrounded by assailants and stabbed with a knife and hacked with a cutlass.

As the victim still struggled to escape, he was pushed to the floor and trampled upon by the suspected cult members.

It was observed that after stabbing the two youths, the thugs who thought they were dead fled the scene.

Minutes later, however, policemen and officials of the Lagos State Traffic Management Authority (LASTMA) were able to revive the injured youths who were rushed to a nearby hospital.

It was noted that after the fighting had ended, some supporters still refused to return to the campaign ground.

PUNCH Metro learnt that the suspected gangsters went to neighbouring streets where they robbed residents.

A resident, who craved anonymity, said the matter had nothing to do with the rally.

He said, “I cannot say what led to the violence, but I know that one of the guys that was stabbed belongs to a cult.

“The unfortunate aspect is that when fights like this break out, the police just fold their arms because they feel their job is to protect only the politicians at rallies. You won’t believe that after creating mayhem at the rally, the thugs went to Oloponmeji and Berger bus stops where they robbed people in broad daylight.”

The Police Public Relations Officer, DSP Kenneth Nwosu, could not be reached on the telephone.

Meanwhile, Daily Post has a contrary report saying that ;

“The All Progressive Congress, (APC) rally in Gbagada area of Lagos State yesterday was interrupted by violence as political thugs clashed at the venue leading to the death of two people.

It was learnt that trouble started midway into the campaign when one of the speakers was addressing supporters.

The rally that started on a peaceful accord saw members dressed in the party attire. However, problem started when opposing group took up weapons against each other.”


It will be recalled that Mr. Akinwunmi Ambode, the All Progressives Congress (APC) governorship candidate in Lagos, at the APC rally in Ikorodu has promised to construct all inner roads in Ijede, Igbogbo and Ikorodu area if elected the state governor in the February poll.