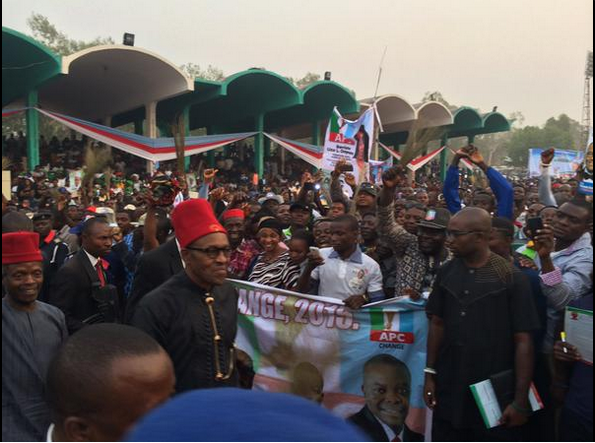 The presidential candidate of the All Progressives Congress, APC, Maj. Gen. Muhammadu Buhari (retd.), on Saturday warned that Nigeria would be in trouble if the Peoples Democratic Party wins the 2015 presidential elections.

Buhari said this while addressing a campaign rally at the Michael Okpara Square in Enugu.

He told a mammoth crowd that it would be a mistake if they failed to vote out the PDP.

“If you make a mistake to allow the PDP to rule again for the next four years, we will all be in trouble”, Buhari said.

The presidential candidate again stressed the need for people to collect their Permanent Voter Cards in order to ensure that the PDP was voted out.

“What we need from you is to make sure that you get your PVCs”, he said.

Promising to invest in agriculture, industries and security, the APC flag bearer disabused the minds of the people that Boko Haram was Islam.

According to him, the insurgency in parts of the North is a pure case of anarchy and terrorism and has nothing to do with religion.

He said, “For anybody to go and kill people in churches, in mosques, in motor parks and shout ‘Allah’, he is saying what he does not believe.

Buhari promised that he would “restart the coal industry” in Enugu, and also ensure regular power supply in the country.

He said the coal resources in the state would be harnessed for power generation.

Earlier, Imo State Governor, Owelle Rochas Okorocha, assured the people that Buhari would stabilise the country, if voted into office.

Okorocha, however, urged the former head of state to give the South-East one more state, and also fund the construction of the second Niger Bridge from the federal budget, instead of the current public/private partnership arrangement.

Other projects, which Okorocha asked Buhari to execute in the South-East if he is elected president, include upgrading the Sam Mbakwe Airport, Owerri, to an international status, and the construction of the Onitsha-Enugu and Aba-Ikot Ekpene roads.

In his remarks, the National Chairman of the APC, Chief John Odigie-Oyegun, urged the Igbo to vote for the APC, noting that they (Igbos) had supported the PDP for 16 years without anything to show for it.

Former Anambra State Governor, Senator Chris Ngige, in an address at the event, said Buhari “will make sure that nobody takes the money that belongs to the people and put it in his pocket”.

The Director General, Buhari Campaign Organisation and Rivers State Governor, Rotimi Amaechi, reminded the gathering that President Goodluck Jonathan was not an Igbo man as they are made to believe.

Addressing the gathering in Igbo language, Amaechi challenged Jonathan to speak Igbo if he claimed to be one of them.

The highlight of the rally was the presentation of the APC flag to the governorship candidate of the party in Enugu State, Barr. Okey Ezea.

In his acceptance speech, Ezea promised to provide free education and free healthcare services to the people of the state if he was voted to become the governor next month.