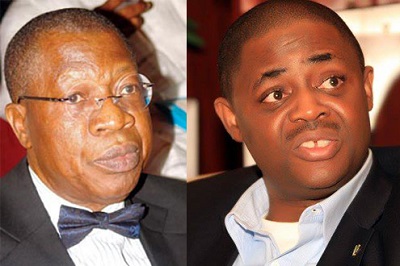 The National Publicity Secretary of the All Progressives Congress, APC, Alhaji Lai Mohammed, has described the statement credited to the Goodluck Jonathan Campaign Organization spokesperson, Chief Femi Fani-Kayode that Gen. Muhammadu Buhari (retd.) should be stripped of his military status and privileges for joining the army with fake result as laughable.

Fani-Kayode had during a press conference on Wednesday said Buhari, who is the presidential candidate of the APC, should also be disqualified from the February 14 presidential election over inability to present his original credentials.

Reacting to the PDP campaign spokesman’s assertion while speaking as a guest on Channels TV’s breakfast programme, Sunrise Daily, Mr. Mohammed explained that after Buhari was overthrown in a military coup in 1985, his house was ransacked and most of his documents were either stolen or burnt.

According to him, upon his (Buhari) return from exile, the former head of state swore an affidavit to show that his results were missing.

“This happened long ago. He was a former head of State and I don’t think he’s going to look for job anywhere where they would ask him to bring his original credentials. He swore an affidavit and he tendered it when he contested for the presidency in 2003, 2007 and 2011 respectively. So what is the noise about Buhari’s credentials?

“I also graduated from secondary school over 53 years ago and I don’t think I can find my WASC result at the moment. I think Buhari should be pardoned if he cannot produce his certificates”, the APC’s spokesman said.

When reminded that the Electoral Act was amended in 2010, Mohammed responded that Buhari used same affidavit to contest in 2011 without this controversy.

According to Mohammed, the controversy surrounding Buhari’s academic qualification is been brought up now because PDP leaders are jittery of the massive support the APC presidential candidate was getting from Nigerians.

“I think Femi is too fast. Why is he jittery? PDP if afraid because there’s no way they could win the presidential election next month”, he added.