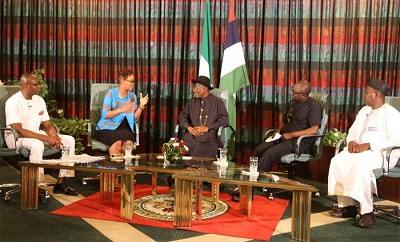 President Goodluck Jonathan gave assurance Wednesday that he will hand over power May 29, 2015 if he loses the March 28 presidential election.

Speaking during a special edition of the presidential media chat televised live from the Aso Villa, Mr. Jonathan sought to dispel speculations in some quarters that he will not surrender power should he lose the polls.

The president has been accused of plotting to thwart the transition process should he be defeated by his main challenger, Muhammadu Buhari of the All Progressives Congress.

The speculations gained momentum in the last one week after the Independent National Electoral Commission, INEC, postponed the elections earlier scheduled for February, amid claims Mr. Jonathan has vowed to rather hand over power to the military than Mr. Buhari, should he lose.

More so, during the week, a video of an event at the presidential villa, Abuja, showed the Senior Special Assistant to the President on Public Affairs, Dr. Doyin Okupe, openly declaring that Mr. Buhari is not electable and will never be elected. “General Buhari is not electable and would not be elected by the grace of God. And why I am saying that is this; Nigeria would not have a president that has not gone to school. This is not going to happen. In Nigeria, it (Buhari’s election) will not happen. In Nigeria it would not happen”, Okupe vowed.

But speaking Wednesday, Mr. Jonathan said he believed the institution of the presidency and the Nigerian nation are too important to be weighed against the political fortunes of an individual.

“Anybody who holds this office and thinks that the office is more important that the nation, then that’s not quite fair”, the president said.

Should he lost the election on March 28, President Jonathan said he will stand down.

“So if as at that time I was ready to conduct free and fair election and if I lose I go, what about now that Nigerians have given me the opportunity to be here for four good years”, he said. “So if the elections are conducted and I lose, of course, we’ll inaugurate a new government. By saying if I lose I will not handover, those are the unnecessary insinuations”.