Lagos Takes 260 Beggars Off The Streets 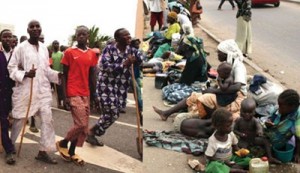 Lagos state Government has evacuated 260 beggars in the last 100 days as it seeks to rid the megacity of street beggars.

This was disclosed in a statement by the Commissioner for Information and Strategy, Aderemi Ibirogba, at the 2,800 days celebration of the Governor Babatunde Fashola’s administration held in Agidingbi, Ikeja.

The rescue operation was carried out through the Office of the Special Adviser to the Governor on Youths and Social Development.

According to the document released by the commissioner, the office evacuated “260 beggars/destitute from the streets during the 100 days under review,” adding that 22 destitutes rescued earlier from the streets are currently undergoing training at the rehabilitation centre, in Majidun, Ikorodu while five children rescued from the streets have been sent to schools after completing their rehabilitation exercise. After treatment, the government offered shelter to six students who were victims of s*xual abuse even as those who abused them undergo prosecution.

The former Special Adviser to Governor on Youth & Social Development, Dr. Enitan Badru earlier disclosed that rescue of beggars from the streets of Lagos is “a continuous exercise.”

Most of the people taken off the streets are often sent to rehabilitation centres by the government.

Share
Facebook
Twitter
WhatsApp
Previous articlePost-Election Violence: Do Not Repeat Mistakes Of The Past – Abdusalami Begs Nigerians
Next articleNigerians Commiserate With Okoya-Thomas’ Family As Patriarch Dies At 79
- Advertisement -