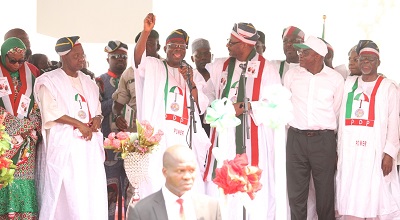 Governor of Kogi State, Cpt. Idris Wada, has assured that the people of the state would not disappoint President Goodluck Jonathan in the forthcoming presidential election.

Wada made the promise at the PDP West Senatorial District campaign in Kabba at the weekend.

According to him, Kogi is home to the president, adding that the people will vote en masse for him and all other candidates of the PDP.

Wada explained that the decision was informed by the enormous gesture shown to the state by the PDP-led Federal Government.

“The Jonathan administration established a Federal University and completed the Lokoja- Abuja road”, he said.

He noted that Kogi had been a PDP state over the years, adding that nothing would make the people turn their backs on the party now.

The governor, therefore, urged the people of Kogi to vote for the party at all levels of the elections, adding that there were more dividends to gain if the president was re-elected.

Deputy Governor, Arc. Yomi Awoniyi, who hails from the zone, said the state was solely for the PDP, adding that the opposition political parties were fighting lost battles.