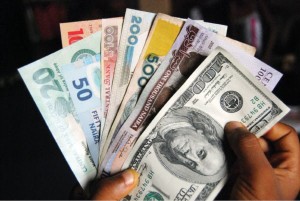 Edo State Governor, Adams Oshiomhole says the Peoples Democratic Party (PDP) will run the Nigerian economy aground if it remains in power beyond 2015, as it blamed the party for ‘killing the nation’s currency.

“When the PDP took over power in 1999, the naira was better than it is today. Now they have killed the naira. Today, a dollar is equivalent to 210 naira, that means cost of products, especially imported products have all gone up and all the basic things needed by the poor have all gone up as a result of the devaluation of the naira,” the governor said.

According to him, the PDP was fond of making empty promises to Nigerians. “The PDP is full of promises. They keep telling you we will do this, we will do that, whereas APC believes in eye-mark. We show you what we have done and what we intend to do more.”

“Why do we want to get rid of PDP leadership in Abuja? We have seen in Edo State a replica of the Nigerian story. The typical PDP legacy was to destroy our system. The changes we have brought to the state replacing PDP legacy of poverty, abandonment, degradation and rottenness is an emphatic statement about the infinite possibility that exist if we have a leader with the fear of God.

“For 16 years, they spent over $30 billion in the energy sector. The more dollar they spend, the more darkness they bring yet they keep bringing exorbitant bills that even the average villagers can’t pay. This is how PDP extort money from even the poorest of the poor.”

Oshiomole announced the plan of the state Government to build a dam in the Agbede area. He noted: “We tried to dig boreholes here and discovered it doesn’t bring the kind of water we want. We have now decided to work on a dam. That is the best way to get water for Agbede Area.

“We want to dam the Aviele River so that we can pipe the water to the city. We believe that dam will be the best answer. With that one, you will have water 24 hours of the day . Even during the dry season, the water gathered during the rainy season will last up to the following year because it is a river that it flows from. We will make sure that is done”, he assured.

“At the time I assumed office, there was not one road done in Afemai land but now, we have worked on many roads and we still have two years under my own tenure and we will do the remaining ones. Those we can’t finish, once we start it, the next person will be able to complete it. That is why we need a government that must continue,” he said.

He therefore urged the people of Edo State to vote for all APC candidates in the forthcoming elections as PDP government at all level have shown gross incompetence in the last 16 years.