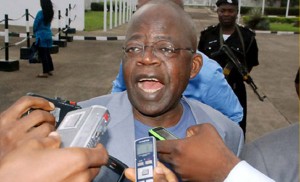 The governorship candidate of the People’s Democratic Party (PDP) in Lagos State, Jimi Agbaje, has disclosed his reasons for parting ways with national leader of the All Progressives Congress (APC), Bola Tinubu, who was once his political ally.

In an interview with Vanguard, Agbaje noted that it was normal in politics for individual perceptions and interests to diverge.

“Bola Tinubu is not my enemy, but we are also not as close as we used to be. But I think that is the nature of politics. I think some politicians often get to a point where they want only subservient people around them. I don’t believe in that type of politics,” Agbaje said.

“I view politics as a sacrifice and service and I view it as the most honourable of vocations. I believe politics should actually be about truth, integrity and service.”

The PDP governorship candidate also dismissed rumours of rancour in the State chapter of the party. According to him, even Musiliu Obanikoro, who lost the PDP primaries to him, is in full support of his governorship campaign.

He also said although his ambition has been supported by elders in the PDP, he has no political godfather.

“I said categorically in an interaction with the media and I repeat today — I have no, absolutely no godfather or godfathers. When I ran on DPA platform, who was my godfather? The reason they rejected our candidacy in the other party is because they knew we were not the kind of person that would accept to be a puppet or stooge for their designs. Acting under the commands and manipulation of a godfather is contrary to my personal inclinations and they know that. I proved that in 2007 . I have no godfather,” Agbaje said.

However, he promised to “work with the members and leaders of the party and indeed the generality of the citizens of Lagos to govern Lagos responsibly and in the interest of our people, and not for the benefit of any godfather.”

“Lagosians actually know on what side of the divide they should be worried about godfathers and god sons or puppeteers and puppets!” Agbaje said.