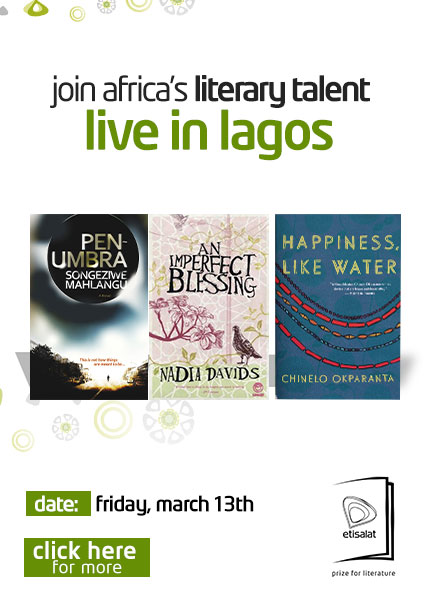 The Etisalat Prize for Literature is the first ever pan-African prize that applauds first time writers of published fiction novels. The prize brings together high profile writers, book critics and academics from across the continent and beyond to identify new writers of African descent.

The maiden edition began on the 5th of June, 2013 and had a panel of four judges chaired by Pumla Gqola, associate professor in the Department of African Literature at the University of the Witwatersrand (South Africa). Other judges were Zaks Mda, Professor of Creative writing at the University of Ohio and winner of the Commonwealth Prize, Billy Kahora, Managing Editor of Kwani Trust, of the literary Journal Kwani and Sarah Ladipo Manyika, writer and academic.

Bulawayo with her “We Need New Names”, beat two other finalists Yewande Omotosho with “Bom Boy”, and Karen Jenning with “Finding Soutbek”, at the grand finale of the maiden edition.

PRIZE FOR LITERATURE 2014: The second edition of Etisalat Prize for Literature began on the 12th of May, 2014 and has a panel of three judges chaired by Sarah Ladipo Manyika, who was one of the inaugural Judges for Etisalat Prize for Literature 2013. Other judges are Jamal Mahjoub, an award winning writer of mixed British/Sudanese heritage, and Tsitsi Dangarembga, contemporary African feminist.

The shortlisted writers for the Etisalat 2014 Prize for Literature and their works are; – Nadia Davids, An Imperfect Blessing, Chinelo Okparanta, Happiness Like Water and Songeziwe Mahlangu, Penumbra.

The Grande finale of the 2014 edition of the Etisalat Prize for Literature will hold on the 15th of March 2015.