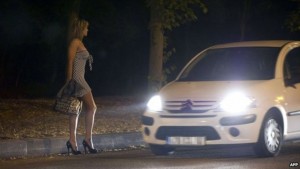 France’s Senate has rejected a planned 2013 law which penalizes  people who pay for sex, and has chosen to maintain the offence of soliciting. BBC was there:

Although prostitution is legal in France, soliciting in public and pimping are not. The National Assembly voted 16 months ago to impose a €1,500 (£1,090; $1,600) fine on clients, shifting the criminal burden from prostitutes. The upper house’s decision to scrap the fine will now go back to the assembly.

Social affairs minister Marisol Touraine said that Monday night’s vote was “absolutely unbelievable and contemptuous towards women”. But Joelle Garriaud-Maylam, a conservative senator, argued that the offence of soliciting was a useful resource for the authorities. “To help these women, you first of all have to identify them.”

The initial move to shift penalties from prostitutes to their clients followed a Swedish law that made it a crime to buy sex but not to sell it. Supporters argued that the move would help tackle trafficking networks. A Swedish government-commissioned report suggested that the 1999 law had brought about a dramatic fall in the numbers of women working as prostitutes. But the effect of the law is not entirely clear as many prostitutes have moved off the streets and on to the internet.