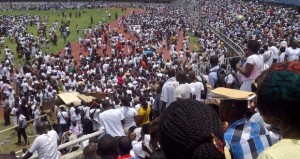 President Goodluck Jonathan, Friday, presented letters of employment into the Nigerian Immigration Service to 33 members of the 15 families who lost sons and daughters during the Service’s recruitment exercise last year. He also gave them N5 million each, in fulfillment of his promise that three members each from the families of those who lost their lives would be compensated.

The event which took place at the press briefing room of the presidential Villa had in attendance the Minister of Interior, Abba Moro as well as the Comptroller General of Immigration, David Paradang, the supervising Minister of Information, Edem Duke and other government officials.

Employment had been offered to three members of each bereaved family, but some of the bereaved families are yet to present qualified members to take up the offer.

In his remarks at the occasion, the President said that he was deeply saddened by the death of their relatives in circumstances that were completely avoidable and unwarranted. He said that the Federal Government was fully committed to ensuring high standards for recruitment processes into the public service, and the provision of safety measures to avoid the recurrence of the March 15, 2014 incident which claimed many lives.

“Today is a sad day for all of us. First, let me convey our deepest condolences to the families who lost very young people during the recruitment exercise into the Nigeria Immigration Service. It is quite regrettable and we promise that such a thing will never happen again,” Jonathan said.

He apologized for the delay in fulfilling the promise of employment to members of the bereaved families, explaining that employment into the public service must go through some processes.

Cheques for an undisclosed amount were also given to each of the bereaved families at the occasion. “The cheque is not for compensation. You cannot replace somebody with any amount of money,” the President said.

A guardian of one of the victims identified as Yunusa Imam, who spoke on behalf of the bereaved families thanked President Jonathan for the cheques and letters of employment. “We thank you, Mr. President for the promises that you have kept. We are profoundly grateful,”

Each of the families of the deceased, was handed a cheque of five million naira each, while three family members were each given employment letters.
President Jonathan in a brief remark after handing over the cheques and employment letters promised that such incidence would not repeat itself again.
” I promise this country that such will not happen again. This will be the last of such things” he emphasised.
He said the monies given to the families of the deceased should not be seen as compensation because it cannot replace the lives lost.
The Comptroller General of the Immigration Service, David Paradang told journalists that out of the 45 candidates ten had to be replaced because they did not meet the criteria of the service.
He explained that some of them were shorter than required, overweight or over aged adding that the families of the ten have been asked to bring replacement for the slots.
He noted that some of them who are graduates were employed as Assistant Superintendent, those with National Certificate of Education (NCE) were employed as Assistant Inspectors while those with the West African school certificate (WASC) were employed as Immigration Officers 3.
The service has currently resumed the employment exercise. Paradang said the service intends to recruit a total of 2,000 officers less the already slated 45 slots.
Minister of Interior, Abba Moro said the government accepts the incident as an act that was not planned for.
He said those wounded in the exercise will not be forgotten adding that they will be included in the second phase recruitment which is ongoing till May.