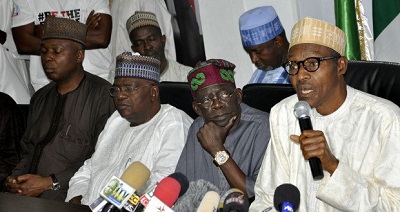 The All Progressives Congress Presidential Campaign Organisation (APCPCO) has noted with utter disgust, the descent to the abyss by the Peoples Democratic Party in its desperate bid to hold on to power.

The APCPCO said in a statement by its Director of Media and Publicity, Malam Garba Shehu, that the ruling party had become so delusional that it now resorts to outright fabrication of lies to blackmail and denigrate the APC and its presidential candidate, General Muhammadu Buhari (retd.) and Vice Presidential candidate, Yemi Osinbajo, to divert attention from the mess it has created in every facet of the lives of Nigerians

The APC campaign spokesman reminded Nigerians how the Attorney General of the Federation (AGF), Mohammed Adoke, an appointee of the President, used his office to do a counter-affidavit and supporting written address in giving tacit approval to a nocturnal group’s desire at truncating the use of card readers in assuring on the transparency of the general election.

The campaign organization noted that an online news blog, Sahara Reporters, made copious public display of the two documents. The AGF, it said, in doing a volte face, denied giving authorization to the staff members of his Office in that ignoble service to the Nigerian state!

“A patriotic Nigerian soldier, Captain Sagir Koli, had done a painstaking and elaborate audio recording of the meeting in which the Presidential order for the rigging of the 22nd June, 2014 Ekiti governorship election in favour of the Peoples Democratic Party (PDP) was handed down. Among the people present at the meeting were: Mr. Ayo Fayose, the greatest beneficiary of the nefarious rigging plot, Mr. Musiliu Obanikoro as the Minister of state for Defence; Brigadier-General Aliyu Momoh, the commander of 32nd Artillery Brigade; Alhaji Jelili Adesiyan, Minister for Police Affairs; Otunba Iyiola Omisore, PDP governorship candidate for Osun State.

“Meanwhile, Ayo Fayose, Jelili Adesiyan and Musiliu Obanikoro had variously made statements in attesting to the veracity of the nocturnal meeting; President Goodluck Jonathan, pressured to probe the incident, peremptorily foreclosed such investigative check when he said “If someone comes up with a spurious allegation that has no substance and the person disappears, of course, what do you want me to do?”

“Obviously, this President is not mindful of his oath of allegiance to the Federal Republic of Nigeria! The evidence of audio recording with the available technology can be used to ascertain the truth about the plot, regardless of the presence or absence of the source of it. Apparently, the President, caught in the act of ordering an electoral heist, is unwilling to initiate a probe that will indict and incriminate him.

“The Director of Communication for the PDP Presidential Campaign, Chief Femi Fani-Kayode, said with uncanny impudence that the APC Vice Presidential candidate, Professor Yemi Osinbajo, was made to agree to an oath to resign six months after and allow Senator Bola Tinubu, in the event that APC wins the Presidential election. Quite evidently, this piece of bunkum was meant to vitiate the integrity of our respected Vice Presidential candidate by the band of dishonourable politicians in the PDP. We state, without any iota of equivocation, that this is untrue and unfounded.

“The incompetence and utter cluelessness of the Presidency in tackling the downward spirals of the Nation’s economy, the nauseous corruption assailing the Nigerian polity and the discomforting insecurity of lives and property are issues that the Nigerian citizens consider germane to their existence. These should be the pertinent issues ahead of the elections. Unfortunately, the PDP-led Presidency seeks to change the narrative by resorting to tales by moonlight.

“On our part, we shall continue to insist on these enviable standards of good governance in the Nigerian political space”.