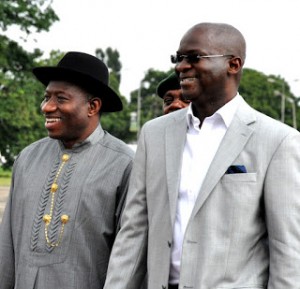 Lagos State Governor Babatunde Fashola, yesterday, urged the electorate to ensure that incumbent politicians seeking re-election were voted for based on their track records as they had enough time to prove their mettle during their first tenure.

Fashola said this while commissioning nine network of roads in Maidan-Aina-Agiliti area of Mile 12, Kosofe Local Government Area of the state.

The governor also urged residents against collecting dollars and other incentives, which he said were being shared by the Peoples Democratic Party (PDP) as inducement to win elections in the state.

“If you collect dollars, know that you have collected your security, your roads and your infrastructure. It is demeaning, degrading and insulting that anyone who has made promises to come back and offer you money. Tell them your dignity cannot be bought by naira or dollars.”

Fashola also commissioned 18 Classroom Blocks at Aiyedire Ajibola Senior High School, in Ketu area of the state, saying the road project was an evidence of his government’s slum regeneration and urban renewal plan.

He said whoever had visited the area before the construction would understand why the whole residents had turned up to witness the commissioning.

“I was here in 2007 and this place was taken over by flood after a downpour. The only source of movement from Kosofe to Maidan is by canoe. You were all very unhappy and asked for culvert and jetty. I said no, since you pay your taxes, I promised to give you a first-class bridge and you have it today,” Fashola said.