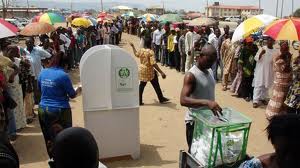 Th‎e Kwara State chapter of All Progressives Congress, APC, has urged Kwarans to vote and wait at their polling units to ensure that their votes are counted.

This was contained in a statement issued by its Publicity Secretary, Sulyman Buhari.

The statement reads in part: “We urge the good people of Kwara State to troop out en masse on the 28th of March, the rescheduled date for the Presidential and National Assembly elections to vote and defend their votes.

“Kwarans should not only vote but also wait at their polling units to ensure that their votes are accurately counted.

“The clarification becomes necessary due to a confusing and unlawful ‘vote and go home’ statement reportedly ‎made by the Inspector-General of Police, Mr Suleiman Abba.

“We reiterate the position of our ‎party that voters should ignore the unlawful order and rather listen to INEC Chairman, Attahiru Jega, who said the electoral law does not state anywhere that voters cannot or should not wait to watch and ensure that their votes are counted”.

Mr. Buhari said the ultimate aim of the opposition PDP sponsored violence in Kwara State is to scare people away from voting units and cause voters apathy but assured Kwarans that the APC-led government in the state will do everything within the ambit of the law to protect the people before, during and after the general elections.