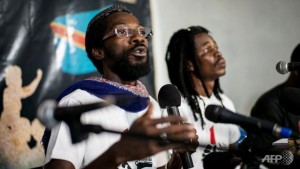 Security forces in Democratic Republic of Congo have been accused by the Human Rights Watch (HRW) on Thursday of illegally detaining and torturing pro-democracy advocates as part of a crackdown before a presidential election next year. Reuters report:

As many as 40 activists, musicians and journalists were arrested in the capital Kinshasa on March 15 during a news conference organized by Congolese and West African campaigners to promote youth participation in politics.

The government says the organizers were teaching armed insurrection. A security source told Reuters that investigators are probing the financing of the event.

Three activists remain in the custody of the National Intelligence Agency (ANR), though they have not been charged or given access to a lawyer, as required by Congolese law, the U.S. rights campaigner said in a statement.

Intelligence agents and police in the eastern city of Goma also arrested members of the group Struggle for Change (Lucha) who peacefully protested the Kinshasa detentions.