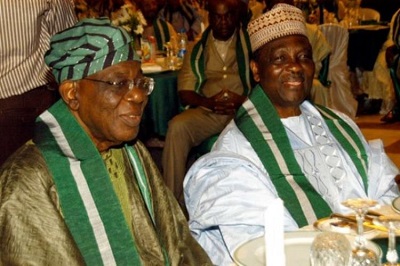 President Goodluck Jonathan on Saturday charged Nigeria’s past and current leaders to emulate the exemplary lifestyles of a former Head of State, Gen. Yakubu Gowon (retd.); and the former Head of the Interim National Government, Chief Ernest Shonekan.

The President spoke at the fifth presidential prayer breakfast meeting held inside the old Banquet Hall of the Presidential Villa, Abuja.

Jonathan said the two former leaders had always made their presence felt at programmes organized inside the Villa throughout the tenure of his administration.

President Jonathan, who will be handing over to Gen. Muhammadu Buhari (retd.) on May 29, 2015 described Gowon and Shonekan’s show of support as patriotic, adding that if all former leaders borrowed a leaf from them, the country would be a better place for all.

He also used the occasion to thank Nigerians for the opportunity given him to serve in various capacities in the last 16 years and promised to continue to do his best for the country even as he gradually joins the rank of the nation’s former leaders.