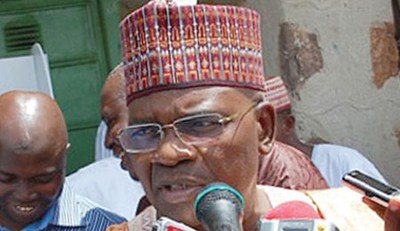 A former Governor of Gombe State, Mohammed Danjuma Goje, has called on the people of the state to come out en masse on Saturday and vote the All Progressive Congress (APC) as the state cannot afford to be in the minority or opposition.

His call came barely 48-hours after Minority Leader of the State House of Assembly and about 50 aides of Governor Ibrahim Dankwambo, dumped the ruling Peoples Democratic Party in the state for APC.

Goje, who is presently the Senator representing Gombe Central, spoke at his Gombe residence briefly after he returned from Yamaltu-Deba Local Government Area, were he received more PDP members, who defected to the APC.

“Today, I received a serving member of the House of Representative who contested election and lost. His name is Shuaibu Galadima, he left PDP for APC. Coordinator for the person who contested against me for the Senate, Tanimu Usman, who also served in my cabinet and a serving Special Adviser also defected to APC.

“Another serving Special Adviser on Hajj Affairs, Sa’adu Hassan and a serving Senior Special Assistant to the governor, Kabiru Kuri Jara and a Permanent Commissioner in Gombe State Assembly Service Commission, Abdullahi Magaji Difa also defected from PDP to APC. I received six leaders today with thousands of their supporters. Many leaders are on the way, we’ll let you know as they come”, he said.

On speculations that incumbent, Governor Ibrahim Dankwambo was planning to defect to the APC, Goje said, “we don’t need him. Let him stay in his PDP and let us stay in the APC. And I trust the good people of Gombe State to do the right thing”.