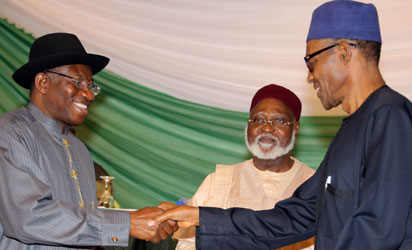 President Goodluck Jonathan will relinquish power to Maj.-Gen. Muhammadu Buhari (retd.), on May 28, about 24 hours before the president-elect’s inauguration.

This was disclosed by Minister of Information, Senator Patricia Akwashiki, on Wednesday at the end of the Federal Executive Council meeting presided over by President Jonathan.

Akwashiki told State House correspondents that Jonathan would hand over to Buhari at a State Dinner on the eve of May 29, which coincides with Nigeria’s Democracy Day.

She said, “By May 28, the President intends to have the formal handing over done at a dinner so that we can reserve May 29 for the incoming government.

“By May 28, we are expected to have concluded our own government and we are welcoming the incoming government.

“Also you know May 29 is our Democracy Day. So, we have activities lined up all through that week, showcasing all what we have achieved and all other things we do normally on our Democracy Day except that this year is special with the inauguration of our new President that is coming up on May 29”.

The information minister added that President Jonathan had directed all Ministries, Departments and Agencies to prepare their handover notes and submit same to Secretary to the Government of the Federation, Senator Pius Anyim, on or before April 20.

According to her, it was Anyim’s responsibility to compile the notes, which will form the bulk of the president’s handover document to his successor.

She further said while the valedictory FEC meeting would hold on May 20, everything that requires the president’s signature must be presented to him latest on May 13 so that the incoming government would not accuse him of rushing projects.

The minister added, “The President emphasised on the need for all MDAs to submit their handing over notes to the Office of the Secretary to the Government of the Federation by 20th of this month, that is next Monday. So we are going to be very busy this weekend putting our handing over notes together.

“The President also emphasised that he would require another little briefing from all MDAs to indicate inherited projects, how far they have been executed and initiated projects by his administration and the level of completion, whether completed, ongoing or abandoned”.

Akwashiki, however, said notwithstanding the transition programme, the wheel of governance had not stopped in the country.

“That is not to say that governance has stopped, of course we are in government until the day the President-elect takes his oath of office”, she explained.