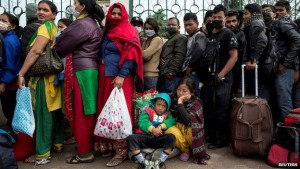 Aid has begun to reach remote regions near the epicentre of Saturday’s devastating earthquake in Nepal. As relief efforts continue in the Kathmandu Valley, the UN says the response is broadening to include areas such as Dhading and Gorkha. BBC reports:

The 7.8 quake has claimed more than 5,000 lives. Many survivors remain in desperate need of food and water. Thousands of people are queuing to board buses and leave the capital, amid fears of further aftershocks. The government is providing free transport for Kathmandu residents hoping to travel to their hometowns. School buses have been sent to supplement overstretched services.

Aftershocks, landslides, severe damage from the earthquake and creaking infrastructure in one of Asia’s poorest countries have complicated the rescue efforts. More than eight million people in 39 districts have been affected by the quake, the UN says. More than 10,000 people have been injured.