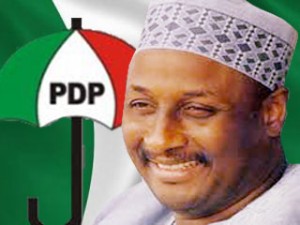 Niger State Governor Muazu Babangida Aliyu, yesterday, slammed the Adamu Muazu-led National Working Committee (NWC) of the People’s Democratic Party (PDP), for remaining in power after leading the party to defeat in the last general elections in the country. According to him, the most civilized thing was to throw in the towel.

“How could you lead a party to disastrous outing in an election and you are still in that place, take the blame for the defeat by quitting and if the PDP still wants you they will beg you to stay?” Aliyu wondered. He spoke at the commissioning of the multi -billion Naira Shiroro Bridge linking Niger and Kaduna States.

He warned that if Muazu and his team refused to resign, “the actual change will come in March 2016 when we will elect new leaders at the national convention of our party.”

The governor, however, dispelled rumours of plans to float a new party with his Jigawa State counterpart Sule Lamido. He described the speculations as misleading and as mere fabrications of falsehood.

“We are not creating a new party; we will remain in the PDP and whoever planted the story has made a mistake.