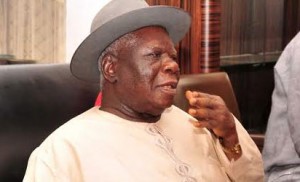 Clark made his loss public in a statement released yesterday. He said his 27-year-old grandson was a final year medical student in the United States of America, reports Vanguard.

The statement explained that Obaro is the son of Dr. Godwin Okorodudu and Mrs Rebecca Okorodudu, the eldest daughter of Chief Edwin Clark.

The young man’s remains have been brought back to Nigeria. He will be buried at Ovu, his father’s home town, in Delta State.