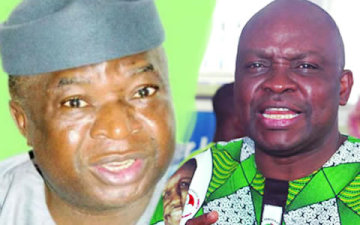 The 19 All Progressives Congress lawmakers in Ekiti State House of Assembly have raised the alarm over an alleged plot by Governor Ayodele Fayose to use thugs to kidnap them.

They urged the governor to stop trailing them, saying it is evil to also plot to kidnap some members of their families in order to force them to stall the impeachment move against him.

The APC lawmakers said the latest move on their kidnap plan had exposed the insincerity of the governor in calling a truce meeting last week to seek an end to the lingering political crisis in Ekiti State.

But Fayose described the allegation as “one of the usual false rants of people afraid of their own shadows”.

The aggrieved lawmakers in a statement by Speaker Adewale Omirin’s Special Adviser on Media, Wole Olujobi, said the governor remained “the main obstacle to peace in Ekiti State”, wondering why a governor seeking peace should be on their trail and planning to kidnap some of them or, in the alternative, seize their children for ransom.

“We note the surveillance activities of the governor by the accurate and inaccurate accounts of our movements as posted on the Facebook wall of his aide, Lere Olayinka.

“We can’t ignore the information by our usually reliable sources about this kidnap plan. The governor is capable of any evil. We have it on good authority that he is on our trail just to arrest some of us so that we don’t have the quorum for his impeachment.

“The alternative is to kidnap members of our family, particularly our children in their schools, by a faceless gang calling themselves a concerned Ekiti State non-political group to hide their political identity. They are to insist that the lawmakers must drop their impeachment plan or the children will be killed”, the statement stated.

The lawmakers, therefore, called the attention of security agents to the alleged plot, saying that their concern should not be treated with levity.

The lawmakers also urged Ekiti leaders to call the governor to order while appealing to security agencies to be alive to their responsibilities by providing security for all Ekiti people irrespective of their political leanings and prevail on the governor to stop all activities that constitute a threat to peace in the state.

In a swift response to the allegations, the governor through his Chief Press Secretary, Idowu Adelusi, said, “The APC lawmakers have to come up with this falsehood to cover their shameful desecration of the status of Ekiti elders, whose genuine efforts at peace they have spurned only to continue in their despicable lies against their state”.

According to Fayose, the lawmakers are now looking for all kinds of lies to keep themselves in the news to deceive the world, “whereas they know that they have lost in their plot to completely bring Ekiti to its knees.

“We charge security agencies, elders and indeed the people of the state to note the trend of their lies, ignore them and focus on their support for Governor Fayose as he strives to play the role they had given him in the journey to build a better Ekiti for us all”.