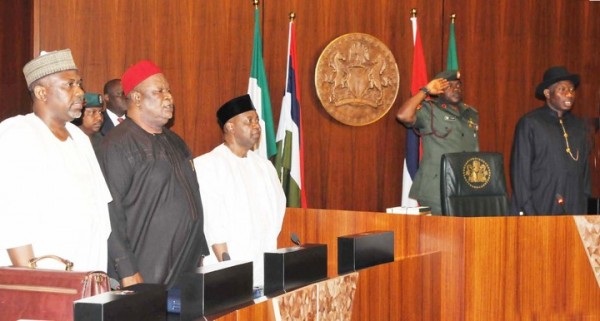 In the absence of any last minute change of plan, President Goodluck Jonathan will tomorrow, Wednesday, dissolve his cabinet, Daily Trust has reported.

Citing a presidency source, the newspaper reported that President Jonathan would dissolve his cabinet after a valedictory session scheduled to hold inside the Council Chambers of the Aso Rock Presidential Villa, Abuja, Wednesday morning.

The source also confirmed that the Federal Executive Council (FEC) meeting tomorrow would be the last as the Jonathan administration winds down on May 29.

He said the president would use the opportunity to thank his cabinet members and request prayers for the country as well as for the incoming Muhammadu Buhari administration.

A member of the president’s kitchen cabinet told Daily Trust yesterday that all the ministers had received letters from Mr. Jonathan since Friday thanking them for their service to the nation.

The minister, who is from the South-West, said President Jonathan stressed in the letters that Wednesday’s council meeting would be the last to be held under his leadership.

He further disclosed that in compliance to a directive from Jonathan, all ministers were expected to hand over the affairs of their ministries to their respective permanent secretaries by Thursday.

The minister, who pleaded anonymity, added that there would also be send-off ceremonies for cabinet members on Thursday.

He said: “I can confirm to you that this Wednesday will mark the last Federal Executive Council (FEC) meeting to be presided over by President Goodluck Jonathan. That is when Mr. President will dissolve the cabinet.

“This is not catching us unawares. All of us have been duly informed. Mr. President has sent letters to all of us who are his ministers. Mr. President thanked us for having served the country meritoriously well together with him within the last few years”.

It would be recalled that the Minister of Information, Senator Patricia Akwashiki, had told State House correspondents after the April 15 FEC meeting that the last council meeting under Jonathan would hold on May 20 (tomorrow).

“…The last one (FEC meeting) that will be the valedictory one, on May 20”, the information minister had said then.