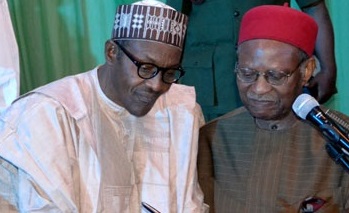 Former Secretary-General of Commonwealth, Chief Emeka Anyaoku, Wednesday told president-elect, General Muhammadu Buhari (retd.) that the expectations of Nigerians from his administration, which would come into effect from May 29, were high, urging him not to fail the people.

The expectations, Anyaoku said, were hinged on the campaign promises of Gen. Buhari.

Speaking to Journalists during his congratulatory visit to the president-elect at the Defence House in Abuja, Anyaoku, who a day earlier had led members of the Presidential Advisory Council on International Relations to bid President Goodluck Jonathan farewell, extolled the virtues of Buhari, saying he was a disciplined man, who was averse to corruption.

He said: “I had useful discussions with president-elect, congratulated him on his victory and told him he’s coming in as president on a very high wave of expectations throughout the country. I also told him that the high expectations are based on the promises he made during his campaign to the people but more importantly on the general perception of his character.

“He is perceived as a man with very strong sense of discipline, a man who is truly averse to corruption, a man whose lifestyle has been frugal not ostentatious or opulent and above all a man who is very committed to the welfare of the masses. I believe that if his administration reflects these qualities that the country’s challenges and problems would be effectively tackled”.

When asked by journalists to offer diplomatic counsel to the incoming government with regards to the xenophobic attacks in South Africa, the former Commonwealth Sec-Gen advised that the president-elect should continue to work with South Africa’s President, Jacob Zuma.

He also advised Nigerians living in Indonesia to be law abiding in their host country.