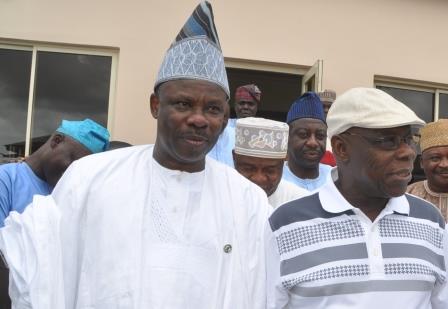 Governor Ibikunle Amosun of Ogun State has acknowledged the immense contribution of former President, Chief Olusegun Obasanjo to his re-election.

Amosun, who was appreciating the people of the state for their support which ensured the success of his first term tenure as well as the re-election at the polls in the April guber polls, however added Obasanjo deserved a special mention and described him as the “big masquerade” whose support attracted goodwill to him (Amosun).

The Governor spoke while addressing thousands of supporters at the MKO Abiola International Stadium, Abeokuta, shortly after his inauguration for another round of four years.

According to Amosun, Obasanjo deserved a special mention and commendation.

The mere mention of the ex-president’s name by the governor struck a chord with the crowd at the stadium as they erupted into a loud ovation for Mr. Obasanjo, who wasn’t in attendance but was represented by his wife, Mrs Bola.

Amosun said: “…but, as Yoruba use to say, that Egun Nla lo n gbe yin Igbale ( the big masquerade is the last at the shrine) let me specially appreciated our Baba, former President, Baba Olusegun Obasanjo…” (the governor’s speech was interjected with a deafening ovation at this point).

“He could not be here, because he is in Abuja, but, we have his wife; our mother with us here. I say you are recognized Mama”.

The former president has not hidden his admiration for Gov. Amosun, who he credits for ensuring the infrastructural development and urban renewal of the state among others.

“In Yorubaland, we always respect and appreciate elders who stand and hold on to the truth. Despite being in different political party, Baba never hidden his admiration for the wonderful performance of the governor.

“He is not sentimental about the positive rebuilding mission in the state, and that is Obasanjo for you. So, for the people of Ogun state to have given him that cheers, it is a lesson for all that there is always reward for everything”, Mustapha said.