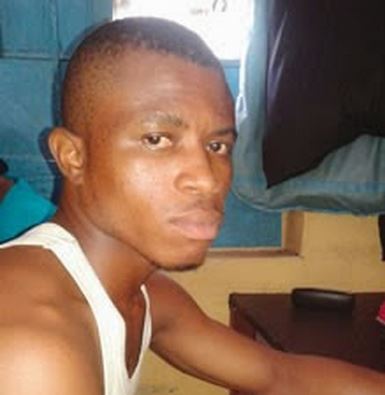 The Lagos state police command has arrested 19 year old Enugu state indigene, Tochukwu Anosike pictured above for killing his friend, 15 year old Imo state indigene, Nonso Monyasa, during an argument over who would occupy a seat at their shop where they are both learning a trade in Lagos.

Punch reports that the young men had been friends in the last two years after the suspect moved to Lagos to learn a trade in the same shopping complex where the deceased was also an apprentice.

On the day of the incident, the deceased had gone to meet Tochukwu to take his seat which they jokingly dragged. Suddenly Tochukwu became angry over the argument and punched his friend in the stomach. The deceased died less than an hour later.

Tochukwu was arrested and taken to the police station where he said he never punched his friend with the intention of killing him. He said they had always engaged in such friendly physical combat before. He pleaded for forgiveness

“I have always lived in the village. My father died when I was in primary five. When I finished my secondary school in the village in 2013, my brother, Anayo, brought me to Lagos so I could learn a trade. I met Nonso (Monyasa) here when I started work as a sales apprentice and we became good friends. But on Sunday, Ejike, who was Nonso’s boss, came to pick a seat in my shop and asked Nonso to take my seat for himself.” he said

The suspect said when the deceased picked his seat from his shop, he (Nonso) punched his lap which resulted in his phone getting damaged

“I told him my phone had developed a fault because of the punch he gave me, but he walked away. I went back to my seat and told him the next time he did that, I would beat him up. He said I could not beat him. He came and hit me with blows, and I gave him a punch in the stomach. He held his belly and went inside their shop,” he added. Nonso died afterwards

A family member of the deceased said medical examinations showed he died of internal bleeding. He however said the deceased family have requested that the case against the suspect be dropped as they are not interested in pursuing any legal matter

“When we rushed him to the hospital, the doctor said he suffered internal bleeding, which killed him. The boy’s family have been informed in the village and they   told me to withdraw the case because they are not interested in pursuing court matters.”