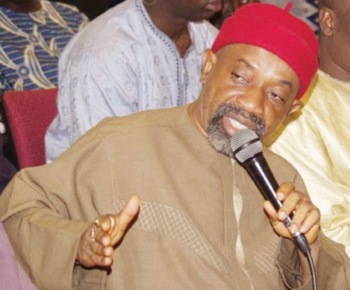 Senator Chris Ngige on Thursday in Abuja denied reports that issues of power sharing was threatening the stability of the All Progressives Congress in the South-East.

He said it was untrue that the Igbos were divided over the position of the Secretary General of the Federation.

Ngige made this known while interacting with newsmen at the sidelines of the visit of a delegation of Ohaneze Ndigbo to the President-elect, retired Maj.-Gen. Muhammadu Buhari.

Ngige said, “We cannot say for now that our party has zoned the position of the SGF to the South-East because we have a standing committee that is still working on distribution of party offices.

“The import of what is happening, like you said, is that in the executive branch now, the South-East is not represented at all and in the legislature, we will not be represented because we have no senator from the South-East of Nigeria.

“We have two House of Representatives members who are not ranking and might not get any meaningful position in the end.

“It is in that wise that the people you saw here last week and today again have been consistently asking for position of the SGF to come to the South-East”.

Reiterating that there was no rancour in their camp, Ngige said, “you can see we are a disciplined people in the South-East, forget about what people are saying in the newspapers.

“We have a caucus and that caucus has met on that position, we are only waiting for the party to officially tell us this is your position and we will submit the name.

“We have come to a decision but when we get to the bridge we will cross it; let the party say South-East this is your position then we will not waste even one hour in submitting a name”.

Also speaking to newsmen, Caretaker Committee Chairman of Ohaneze Ndigbo, Chief Raph Obioha, said there was a feeling among the Igbos of political imbalance in the polity.

“If it is not truly harnessed well, it cannot stand but Buhari gave the assurance that he would treat the entire nation as his constituency for all and we believed him”, he said.